The Influence of Paulo Freire on Today’s Education

The Influence of Paulo Freire on Today’s Education

Paulo Freire was a Brazilian educator born in 1921 that developed many theories and methods regarding philosophy and education. His main approach to education was that people bring their own personal experiences into the learning process, rather than simply dropping information onto people and asking them to memorize. Paulo Freire’s ideologies in learning are connected to famous philosopher, Jean Piaget’s constructivist theory of learning, which another article for can be found on the Doran Website.

Being an educator and a philosopher, Freire’s theories revolve around many of his personal beliefs and experiences while working in the field. Freire’s findings led to a collection of methods and concepts that can be used by any educator. His work aimed at treating kids in a way that leads them to becoming working parts of society. This includes developing their communication, learning, and social interaction skills.

Many of Freire’s writings are practical and can be used by all educators. In this article, we highlight a few of his most impactful concepts and a few applications of them.

As mentioned earlier, Freire himself strongly believed in involving the child in the education process itself. Many people can recall classes in which you were asked to memorize the Alphabet, Freire argued that this knowledge must be connected to an action and involve different forms of expression in the teaching. Practices of this are frequently seen, such as songs or games that involve the alphabet. 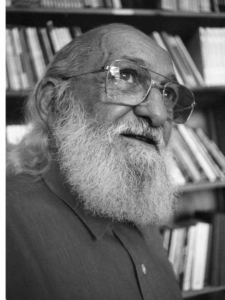 “Problem-posing education affirms men and women as beings in the process of becoming.” – Paulo Freire

Conscientization, also known as Critical Consciousness, is the process of becoming aware of one’s needs. While this concept is extremely complex and cannot be applied to children, it is to be used by the educators themselves. to prioritize and become hyper aware of their surroundings and the reality around them.

According to Freire, an educator should be able to look back at their past experiences and distinctly recognize their change along with what can lead them to grow. This includes being able to connect problems dealt with in the past with new, yet similar problems that an educator is faced with.

This concept revolves around the fact that an educator must be aware of what they know and don’t know. Following this technique, one must accept that there is not a straightforward answer to any problem they are faced with, and that their own knowledge is not all that exists. Aside from using one’s own experiences, an educator must be open to learning more, which introduces the concept of Epistemic Curiosity.

Epistemic curiosity is defined as a person’s constant desire to obtain new knowledge and answer their own questions. As an educator, this curiosity should be very strong, as it pushes oneself to learn new methods of teaching that may help them solve issues they are faced with.

Aside from using this personally as an educator to further your abilities, an educator can also work towards furthering a child’s epistemic curiosity. An easy application of this can be providing resources for children to explore their own questions and expand their knowledge with their own drive to learn. Having small libraries available to children is a step towards developing this curiosity within children.

By learning the impact they can have in the classroom, children learn that as they grow up they can actively cause change around themselves and fix the issues that they see. By using Praxis, children learn to not just focus on what they are learning, but how to use their knowledge to impact their surroundings.

The usage of Praxis creates a very open mindset for children, and pushes them to look for applications of what they’ve learned outside of the classroom as well. If a child is learning about colors, and is asked to count all the red things in their classroom, they will also be looking for red things when they do home as well. While this is a very simple example, the concept applies the same way when learning more advanced things.

Neoliberalism is a political ideology that argues the importance of a consumer’s choices which Freire connected to education and psychology. Essentially, Freire’s concept argues that by offering many types of education and treating it as another product that the “consumer” needs to choose, there will be more eager learners in every classroom. This can be applied on a smaller scale as well. A normally teacher-led class can be divided into 5 groups, each offered a different activity, and since every child chooses where they go, they will also be more interested and eager to learn.

Criticisms of Freire and His Techniques

Aside from his teachings in education, Freire has also developed multiple theories in philosophical and historical fields. His concept of human nature has been criticized, by people such as Eduardo Galeano, a Brazilian journalist. He argued that Freire’s perspective of different people and society is biased because of his upbringing. His philosophical views are directly connected to his theories of education, and his concepts cannot be taken for granted because of this. The methods which Freire deemed fit does not apply to each and every human, as with any other psychological and educational theory.